Discover Bai Tho Mountain - The Roof of Halong Bay

Category : Top Destinations in The World - By Brian Vu - At 7:14 PM / Wednesday, November 30, 2016 - No comment - Location: Hạ Long, tp. Hạ Long, Quảng Ninh, Vietnam
The most stunning and emotional discovery in Halong probably the hiking experience to Bai Tho Mountain (Poem Mountain) which is considered the "roof" of Halong.

Located in the city of Ha Long, Bai Tho Mountain with a mysterious appearance attracts tourists at first sight. From different angles, the mountain looks like lying tiger, in one corner it is like a lion hunting quarry, or sometimes like a flying dragon.

From the 168-m peak of the Poem Mountain - one of the highest mountains in Halong Bay, visitors can enjoy a panoramic view over most of the main roads of the city of Ha Long - Quang Ninh provincial capital as well as world natural heritage site of Ha Long Bay. 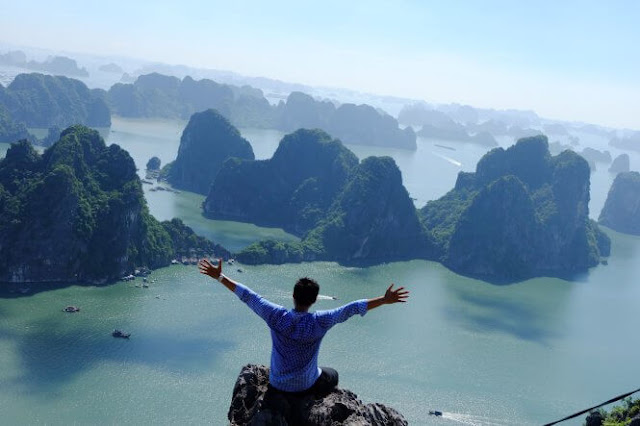 In a conversation with us, a local friend named Quang said: "If you are not climbing Poem, then your trip to Halong is incomplete."

To the fully enjoy the beauty of the north-eastern coast of the country, we have to stand at two points: from the sea and from the Bai Tho Mountain, and then you will have a special and different perspective. "

We decided to make a trip to explore the Bai Tho Mountain to feel the panoramic beauty of Ha Long as Quang introduced.

Road to Poem Mountain is a small walkway between the houses at Bach Dang Ward, Ha Long City. Taking a few minutes to ask right directions, our team was able to find the entrance.
Though the way up to mountain was built by the cement and stone for easier hiking, there are still many hard steep stages with sharp stones, or visitors must go through the bamboo groves or cling to tree trunks to climb up.

The hiking trip is not an easy challenge for many people, or we have to say, it requires a very good health condition and good training to conquer the mountain.

During a hot day and carrying heavy backpacks, our team took nearly an hour for three breaks on the way to reach the summit.

The shirts became patchy and sweaty. Our legs were so tired that sometimes it seemed we could not conquer the peak.

However, when the peak was closer, Ha Long city was gradually smaller under our footsteps, we became determined to conquer the mountain. And when the peak appeared, we hugged each other and cheered in joy.

"It's great, we have successfully conquered it" - La Quang Duy (visitors from Hanoi), a member of the group, shouted and then raised his hand in salute gestures, Duy dignifiedly look up the national flag with yellow star on red background flying at the top of the mountain.

From the top of Bai Tho, Ha Long Bay fits in sight with hundreds of limestone mountains in many shapes and sizes under miraculous hand of the Creator. The road along the coast looked like a small ribbon embracing the city with the Bai Chay bridge, Doan wharf, Watches Tower ...

On the bay, fishing boats cruised between the majestic limestone mountains. All shows up as a beautiful painting of the coastal city of heritage, making anyone overwhelmed by an unimaginable splendour.

About Bai Tho Mountain’s name

According to Mr. Quang, formerly Bai Tho Mountain was called Roi Den Mountain or Truyen Dang Mountain (Lamp Mountain). Legend has it that long ago, the guards on the mountain would burn a fire as a signal for the capital about enemy coming. Since then it was call Lamp Mountain.

In 1729, Lord Trinh Cuong, a famous poet in the Le – Trinh period, also made a poem after reading the one of King Le Thanh Tong, and it was also carved on the cliff here. Probably that is the reason why the mountain was named Poem.