Sukhothai Former Capital – “The Kingdom of Happiness” in Thailand

Category : - By Brian Vu - At 8:53 PM / Sunday, July 23, 2017 - 2Comments - Location: Thailand
Sukhothai was the capital of the first kingdom of Siam established between the years 1238 and 1257, larger than today's Thailand. It has exquisite historical buildings, proving the beginning of Thai architecture. The great civilization associated with the Sukhothai Kingdom has absorbed many influences and ancient traditions; quickly assimilate all these elements to form a very distinctive feature, called "Sukhothai style". This is one of the most representative places of Siamese art in the first stage and the first Thai creation. 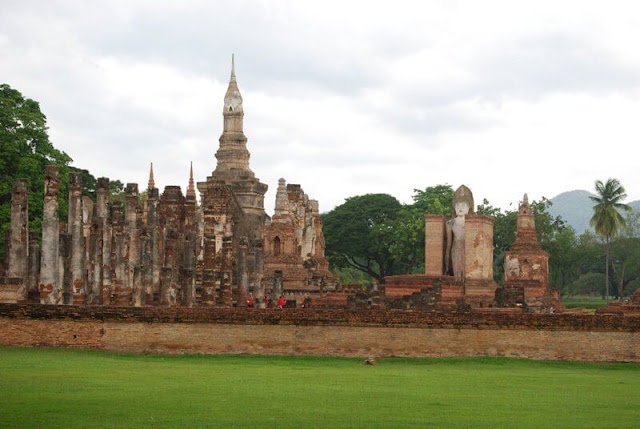 It is believed that the Thai originated about 4,500 years ago in the present-day Mongolia's Ulthai area. The subsequent exodus took them to southern China. Here they build a kingdom called Nanchao, which stretches from South China to the Indo-China Peninsula.

Migration to the south had a distinct momentum in the days of Kublai Khan, a king who rapidly expanded the nation's south to China in the 13th century. The relatively crowded Thai people live in an area where the Khmers and Mon had previously settled. 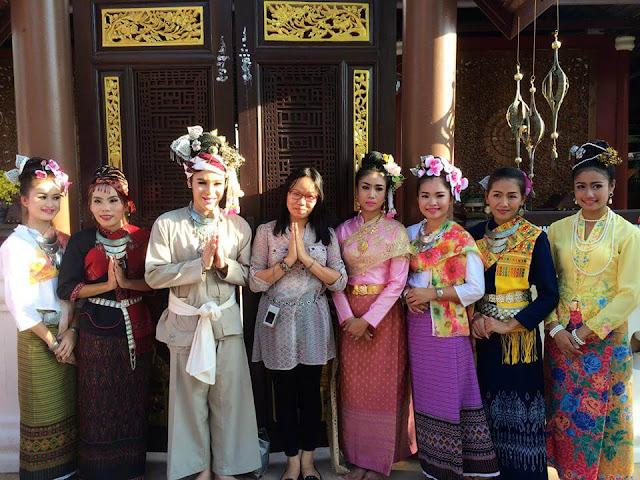 Thai people have settled in different parts of the North, compared to other provinces in Thailand, there is not much connection. In the middle of the 13th century, two Thai princes in the Sukhothai area, Muang Rad Muang Muang Phor Khun Pha Muang and Phra Khon Bang Klang Thao of Muang Banyang, joined forces to expel the Khmer, those who controlled a vast kingdom on the Indo-China Peninsula at the time 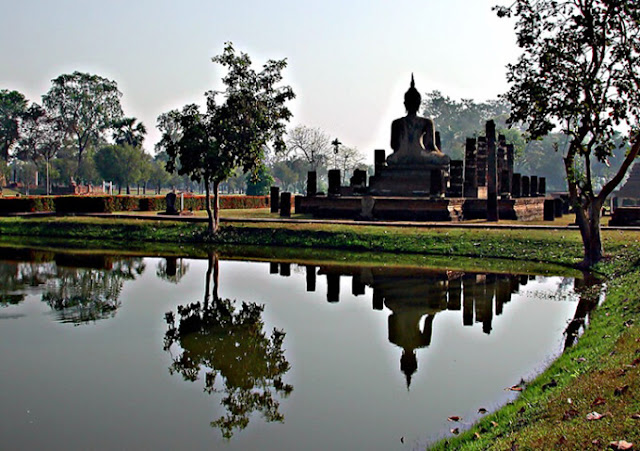 King Ramkhamhaeng opened direct political relations with China, his first trip to China in 1282 to visit Emperor Zhizhai and the second in 1300 after the Holocaust. From the second visit, the king invited Chinese artisans to return home, and these craftsmen taught the Thai art of making pottery. Today, ancient Sangkhalok pottery is something that antique collectors searching for.

The Thai people now have a rather romantic view of Sukhothai, claiming that Sukhothai is the kingdom of happiness, since Sukhothai literally means the beginning of happiness. In fact, this perception is somewhat based on historical data. Part of a famous stone inscription that says, "This area of Sukhothai is very good. There are fish in the water, rice in the field. The king did not tax the merchant delegations. Those who want to sell horses or elephants, silver or gold, then just do it" 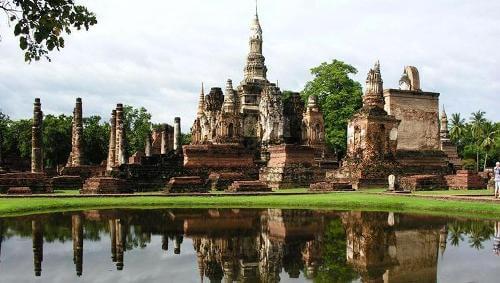 King Ramkhamhaeng also supported the development of religion. Thanks to the king's efforts, Buddhism has become closely associated with Thai culture, producing the classic forms of Thai religious art. The statues of the Buddha carved in the Sukhothai period are cultural treasures, giving the viewer a sense of peace and serenity.

There were eight Sukhothai kings in total. The decline of Sukhothai took place during the reign of the last two kings. The end of the first Thai Kingdom was in 1365. At that time it was downgraded to a vassal state of Ayutthaya, a young power, and expanding southward.

The former greatness of Sukhothai was preserved in the architectural monuments. The ruins of royal palaces, temples, gates, walls, cemeteries, ponds, canals, ditches and irrigation systems, dykes, works that are the economic foundation of the kingdom. Sukhothai has been the Bureau of Fine Arts, with the cooperation of UNESCO, restored. This work not only promotes the Thai national identity but also protects an important part of the cultural heritage of mankind. 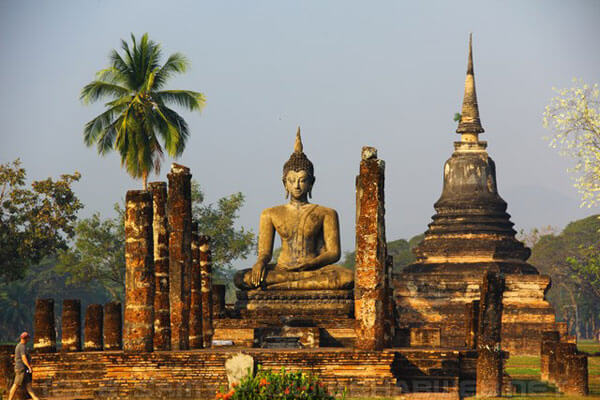 The new town of Sukhothai, about a few kilometers from the old capital of Sukhothai, is where modern hotels, restaurants and other infrastructure are built.

Today visitors to Sukhothai can not ignore the unique architecture left a trace of an ancient kingdom. The royal palace is located in the center of the old town, with an area of 160,000m2, accounting for about one quarter of the old town, surrounded by walls. The whole palace is surrounded by a trench and consists of two main parts, the royal residence and the palace, and the royal temple of Wat Mahathat.

Wat Mahathat is Thailand's largest Buddhist temple and one of the six royal temples in the Thai Kingdom, the Mahathat was built during the Ayutthaya period (Ayutthaya was the former capital of Thailand). The temple, with an area of over 160,000 square meters, is considered to be the heart of Thai Buddhism. 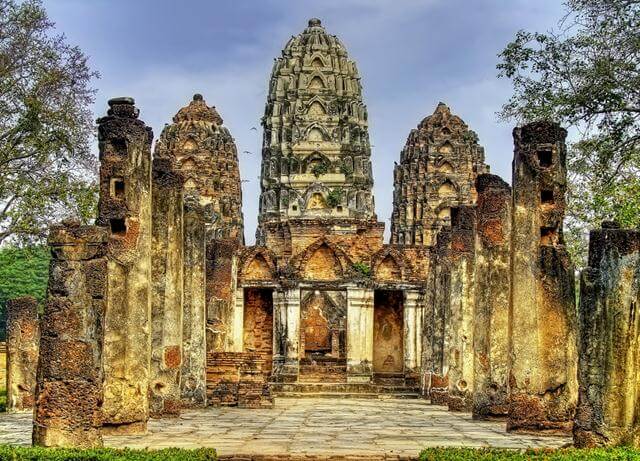 The main hall of the temple is located to the west of the royal palace. There is now a main stupa shaped like a lotus bud and a shrine that has been damaged. The base of the stupa carved images of the disciples of the Buddha are worshiping. On the pedestal are the Buddha statues in meditation posture. In front of the stupa is a large temple, which is home to a very distinctive Sukhothai bronze Buddha statue, made by the emperor Litahi of Sukhothai and erected in 1362. At the end of the world In the 18th century, at the behest of King Rama I, it was moved to the Suthat Temple, Luang Hall, Bangkok, and from there the statue was named Phra Si Sakaya Muni. In front of the main hall is a smaller hall, probably built during the Ayutthaya period. The 8m high Buddha statue is housed inside a separate building.

The south is the campus of a large tower, the tower is built in the hierarchical form. The lowest level of the tower is decorated by the sharp plaster of the devil, the elephant, the lion with the angel riding on his back. The fresco paintings dot the pits of the tower.

Si Sawai Temple is located southwest of the Mahathat Shrine. The temple is surrounded by walls. Inside the wall, the west tower is separated from the main tower built in Lopburi style, or Hindu style. Other stupas next to the shrine are in Buddhist style. This area was originally a Hindu temple, but was later converted into a Buddhist monastery. In particular, the two towers of the Si Sawai Shrine reflect the silhouette of the area's largest lake, which looks spectacular and impressive. 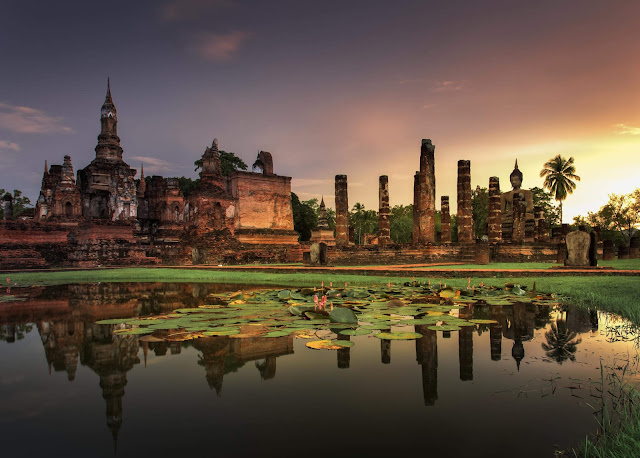 Phra Phai Luang Temple, about 500m north of San Luang Gate. This temple was once a Khmer Hindu temple, but was later transformed into a Buddhist monastery, surrounded by a trench. In Sukhothai, Phra Phai Luang Temple is the second most important temple, after Mahathat.

The 3.38 km2 National Historical Park of Sukhothai became a masterpiece of the first Siamese architecture. This is one of the most representative places of Siamese art in the first stage and represents the first Thai creation.

The park is home to many temples built in the Sukhothai era. This is considered as a perfect modeling and layout park and is the most noteworthy Thai tourist destination. Architecture influences from Khmer, Lana and even Myanmar. The temples are similar in architecture to some temples in Angkor. The temples are surrounded by green lawns, water dikes and beautiful lakes. The ancient shrines pensive under the lake. Thai people have planned this area as a national historical park with the support of UNESCO and are recognized as world cultural heritages.

Surrounded by the ancient capital of Sukhothai is a rectangular arch of about 2 km in length and from north to south about 1.6 km in length. Inside the city is a complex of monuments, including royal palaces and 26 temples and pagodas. The largest is Wat Mahathat. 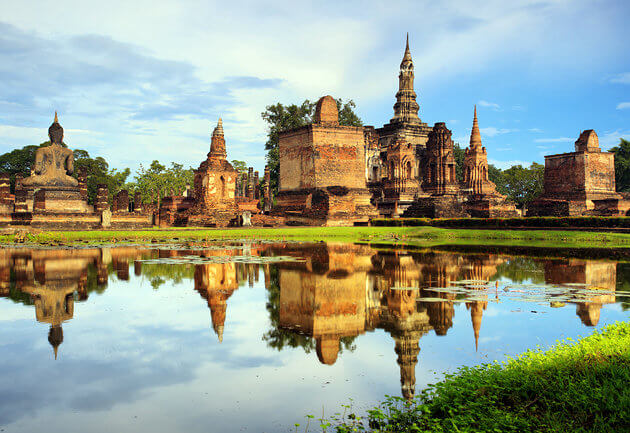 Time has ruined everything and the old capital Sukhothai is no exception. But all the monuments here have been meticulously restored and are said to be quite similar to the original. At each entrance to the sightseeing area, the Thai people have photos of the monument before the restoration and photos of the design of the monument restoration for visitors to learn. Although not to see the ruins in Sukhothai built in the 13th - 14th centuries, but with refined works also meticulously make the viewer does not feel regret. These places are considered sacred by Thai people, so visitors are required to wear elaborate dresses (trousers, long sleeves) to visit Wat Si Chum.

For an overview of the ancient capital of Sukhothai, in order to experience the glorious and splendid beauty of ancient Sukhothai, visitors should arrive there in the morning on a sunny day. Then, the rays of sun will shine on this ancient land and give the beautiful paintings. However, there are also many people like the scene of evil, in the sunshine, the stone columns, mossy wall mysterious color. Although centuries-old, this place is still almost intact so tall rock columns, sitting Buddha statues, Buddha standing bulky. At the foot of the towers there are still very special sculptures.

Great article to read and I am so delighted to see this awesome post which I need to explore more. Thanks a lot sir for this kind information. thanks a lot
http://www.gujaratexpert.com/dwarka-somnath-tour-package-with-gir-national-park