Category : - By Brian Vu - At 9:16 PM / Sunday, August 6, 2017 - 3Comments - Location: Vũng Tàu, Ba Ria - Vung Tau, Vietnam
Shakyamuni Buddha temple is one of the oldest and most famous religious architecture in Vung Tau. As the development of Vung Tau tourism, Shakyamuni temple became a spiritual sanctuary attracting many visitors every year. Coming to Vung Tau - Shakyamuni Buddha temple, visitors will step into a space of harmonious combination between Buddhist architecture and natural beauty, bring a sense of peace, freedom. 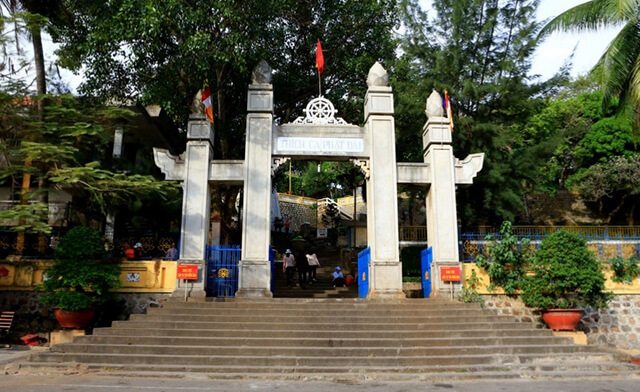 Shakyamuni Buddha temple is a group of Buddhist architecture in the Southern School located on the northwestern slope of Big Mountain, at 608 Tran Phuc Street, Vung Tau City. Since its completion in 1963, Shikishi has not only acted as a religious, spiritual, but also a historical monument, a famous tourist destination of Vung Tau.

Previously, in the early twentieth century, around the area of Mount Vong Tau - almost no one lives. Around the 40s, St. Narada Maha Thera of Sri Lanka (Srilanka) with retired government captain Le Quang Vinh to visit Big Mountain. The monk noticed that the location was ideal for the construction of a Buddhist temple. In 1957, after his ordination, the imperial governor retired Le Quang Vinh is now known as the French Enlightenment has returned here and set up the temple named Thien Lam. 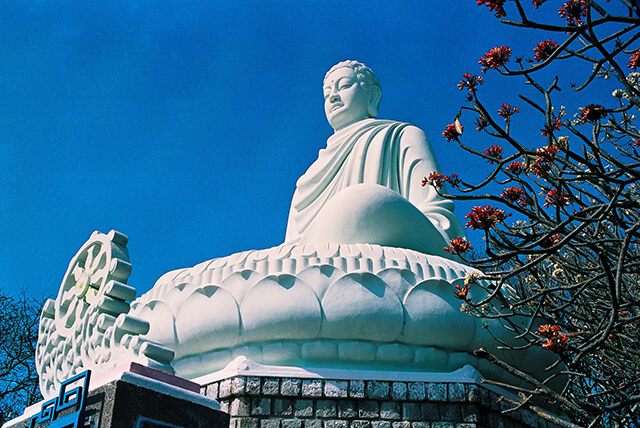 In 1961, the Theravada Buddhist found that Thien Lam Pagoda not only had a beautiful natural setting, but also a great location for pilgrims and tourists to visit. Therefore, the temple has mobilized to raise money for the restoration of the temple, while building the Stupa with the Buddha statue on the mountain. On 20 - 7 - 1961, restoration works, construction officially started. On March 10, 1963, after 19 months of construction, the Buddhist architecture of Shakyamuni Buddha was inaugurated. Since the inauguration, Shakyamuni Buddha temple has gained the attention and interest of many people near and far.

Currently, along with the Statue of Christ, Lighthouse, Long Son Vung Tau ... Shakyamuni Buddha temple with the 10m Shakyamuni Buddha is a tourist attraction attracts crowds of visitors from home to abroad. In Vung Tau, there is another famous Buddha statue of Maitreya Buddha on Ho May Resort. Guests can see the article "Ho May Resort - cloud and sea" for more details.

Shakyamuni Buddha temple carries the beauty of harmonious combination that holds man-made architecture and natural scenery. Come to Shakyamuni Buddha temple, visitors can both worship, Buddha can just enjoy the scenery of nature painting. From the foot of the mountain to the middle of the Great Mountain, rising from about 3m to 29m above sea level, the whole of Shijiazhuang Shrine is divided into 3 levels. Looking from above, each level is like a hug that huges the mountain.

The first level is also the lowest level including the gate and the flower garden. The second level has a traditional display house and a cool place for pilgrims and visitors to rest. The third level is the highest level, and the main area of the Shakyamuni Buddha temple is composed of the main Buddha image . Thien Lam Pagoda itself decorate the sanctuary, the middle of the statue of Buddha Shakyamuni 1.2m in meditation posture. The two sides of the two statues of Shakyamuni in the standing posture height of 1.2 m high. 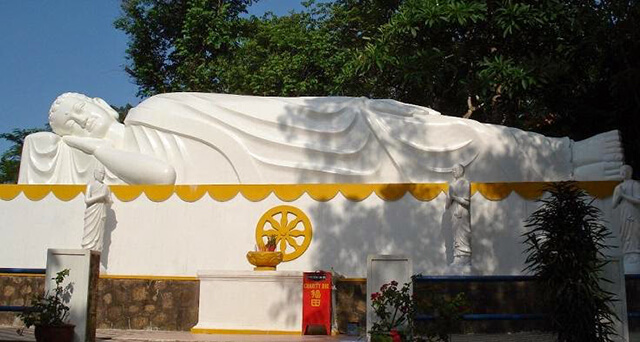 About the Buddha, where there are many architectural works, sculptures. Of which the most prominent is the White Buddha, higher than 10 meters. Inside the statue there are 16 relics of the Buddha. The Buddha statue in Shakyamuni Buddha is one of the symbols promoting the Vung Tau tour is very famous.

Besides the Buddha statue, the Buddha also has a Buddha's relic Stupa 17m high, built in octagonal shape. Inside the tower there are 13 members of the relics of the Buddha raised by Narada Maha Thera. There are four major peaks in the four towers. In the crest of the four sacred relics from India brought back to include the Buddha's birthplace - Lumbini garden, where the Buddha attained enlightenment - Bodhgaya, where the Buddha turned dharma - Deer Park, where Buddha passed away - forest Sala Song Tho.

Visiting the spiritual space of Shakyamuni Buddha  temple, besides praising the Buddha, praying for peace, visitors can learn more about Buddhism, the famous Buddhist stories. After discovering the exciting and exciting places in Vung Tau, this place will help visitors have the opportunity to settle down and find peace of mind.

Good post but I was wondering if you could write a litte more on this subject? I’d be very thankful if you could elaborate a little bit further. Appreciate it..!
http://www.gujaratexpert.com/dwarka-somnath-tour-package-with-gir-national-park